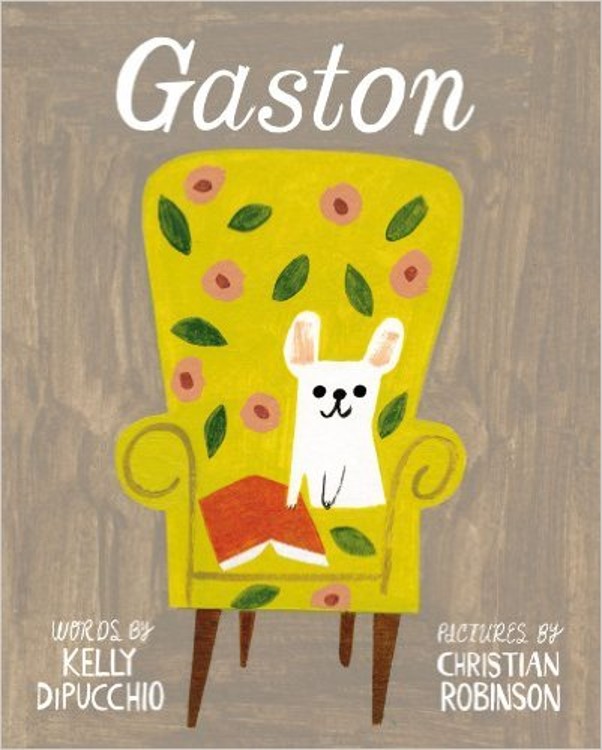 Gaston is a book about a French bulldog, that I chose for La Serpiente Aquatica Negra when we were at the library this week. It wasn’t that she particularly likes the French or dogs, more that I located a book of the right size and shape, and, not knowing what it contained, added it to the pile of books we would borrow for her. The last children’s book I wrote about, well, we won’t even talk about that. Gaston could be similarly depressing, but isn’t, which is a joy when you’ve had a long day and don’t want an aching misery fest to be the final thing you talk to your child about in the evening.

Gaston is the story of Mrs Poodle and her four puppies. Mr Poodle is completely absent. Is that a laissez-faire attitude to childrearing among the French that’s being depicted? Is he down the local zinc, puffing on innumerable Gauloises and muttering incomprehensibly? Of course not. He’s a dog, dogs don’t smoke.

Anyway, Mrs Poodle has four puppies, three of which resemble her and one of which is the more lumpen, boisterous Gaston. The puppies play together and have fun, until one day at the park they encounter Mrs Bulldog and her four puppies. Three of them are big lumps of dogs, but the fourth, Antoinette, is a delicate looking simulacrum of Mrs Poodle and 75% of her progeny.

The two mothers realise their errors, and swap Gaston and Antoinette, then go home. This in itself could be fairly brutal – you grow up, knowing your siblings and mother, and then one day at the local recreation ground you’re suddenly sundered from the bosom of your family and put in with strangers. OK, those strangers may look much more like you, but life is more than just appearance.

Gaston and Antoinette do not adapt well. Gaston is too effete, too civilised for the other bulldogs’ company, and while Antoinette looks like a quiet, well composed poodle, she runs about and ruff-ruff-ruffs far too much. Mrs Poodle and Mrs Bulldog realise how much they miss Gaston and Antoinette, and return to the park the next day, admitting their mistakes and re-exchanging their dogs.

By now, you’d think that Gaston and Antoinette might be nervous wrecks, as their mothers just swap them back and forth like canine pass-the-parcels. But instead, the two families bond: the bulldogs teach the poodles to ruff-and tumble, and in return the poodles teach the bulldogs to be polite and well behaved. Gaston and Antoinette are both united with the families they’ve grown up with, and everyone is happy.

Obviously I’m not so very thrilled by the company of dogs (even a dry dog, I feel, smells a bit like wet dog) but this is a nice story about how love transcends appearance. Or how the French don’t discriminate between breeds. This had La Serpiente’s seal of approval, although so far it’s only been a knee-book. Only the best books graduate to nap-book status, giants of literature such as Robert Munsch’s collected works, Where The Wild Things Are, and The Worst Time. Ironically, The Worst Time is one of the worst times I’ve had reading La Serpiente, but we’ll come to that one anon.