My saintly wife let me sleep until 9 this morning. I woke once about eight and heard a rumpus, but fell asleep again straight away. When I finally awoke, groggy and a bit wonky from lying in bed too long, I still felt much better, so I took La Serpiente out for pancakes to celebrate.
We had a nice, calm morning. We tootled around and got some coffee, then the girls scooted for a while, and then I went climbing while my wife bundled La Serpiente and Destroyer into a taxi and headed off to Jurong. (More on this a little later…)

It was my friend Jalean’s birthday and we were all going climbing together at 3:30; I got there at 3 and wore myself out on a few bouldering problems, but by 3:30 Jalean hadn’t arrived. Nor by 4. She was almost 45 minutes late (detained by other celebrations) and I had to clear off at 4:30.

I’d climbed three routes by then; while in Seattle I bought a climbing harness, and for one route I had a friend belay me, and for the other two I used an auto-belay. I discovered I really, really dislike the auto-belay. It doesn’t ever feel as taut as when a human is working the rope, so I never quite feel secure, and while that’s not so bad going up, coming down I can’t bring myself to jump off the wall, so I end up slowly down climbing. A waste of time for everyone else and not so much fun for me.

With Jalean arriving, she cajoled me to do one last route before I left. I had a choice of a very easy one, a not very easy one, and something I possible, so I took the middle option: 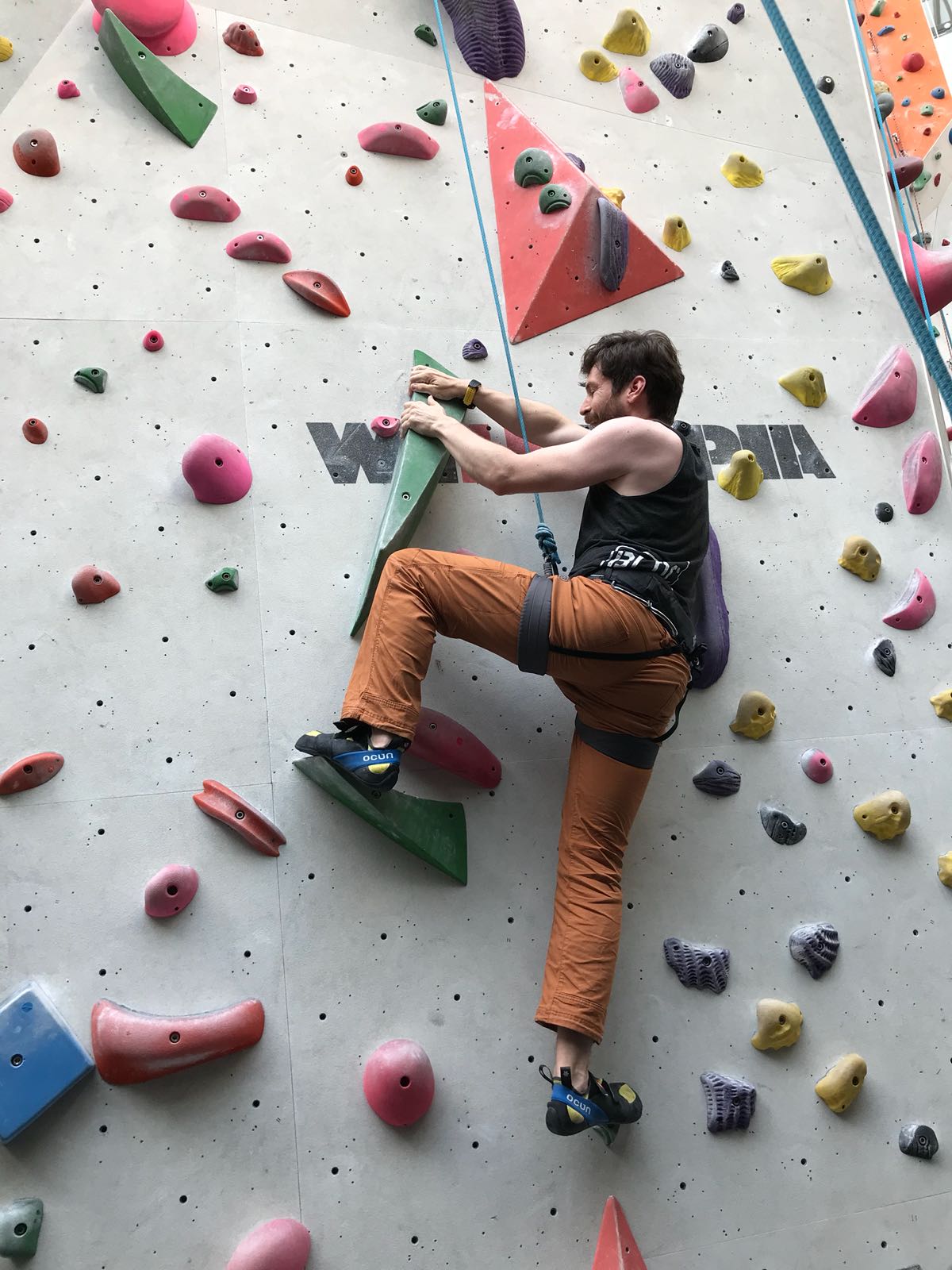 The whole route up was mostly those large green holds, too big for a good pinch grip, angled too much to get a hand wrapped around, and far enough apart to make my brute strength approach less than useful. Of course, having the rope means you should be able to rest between moves, but my instinct to cling on is hard to overcome.

I got most of the way up (three storeys) and ground to a halt near the top. The final hold was just out of reach and I was feeling exhausted. A last bit of cajoling (Jalean yelling up at me to "make [my] daughters proud") was enough to make me… lose my footing, but the rope allowed me to recover and then shift my feet and make the final move. 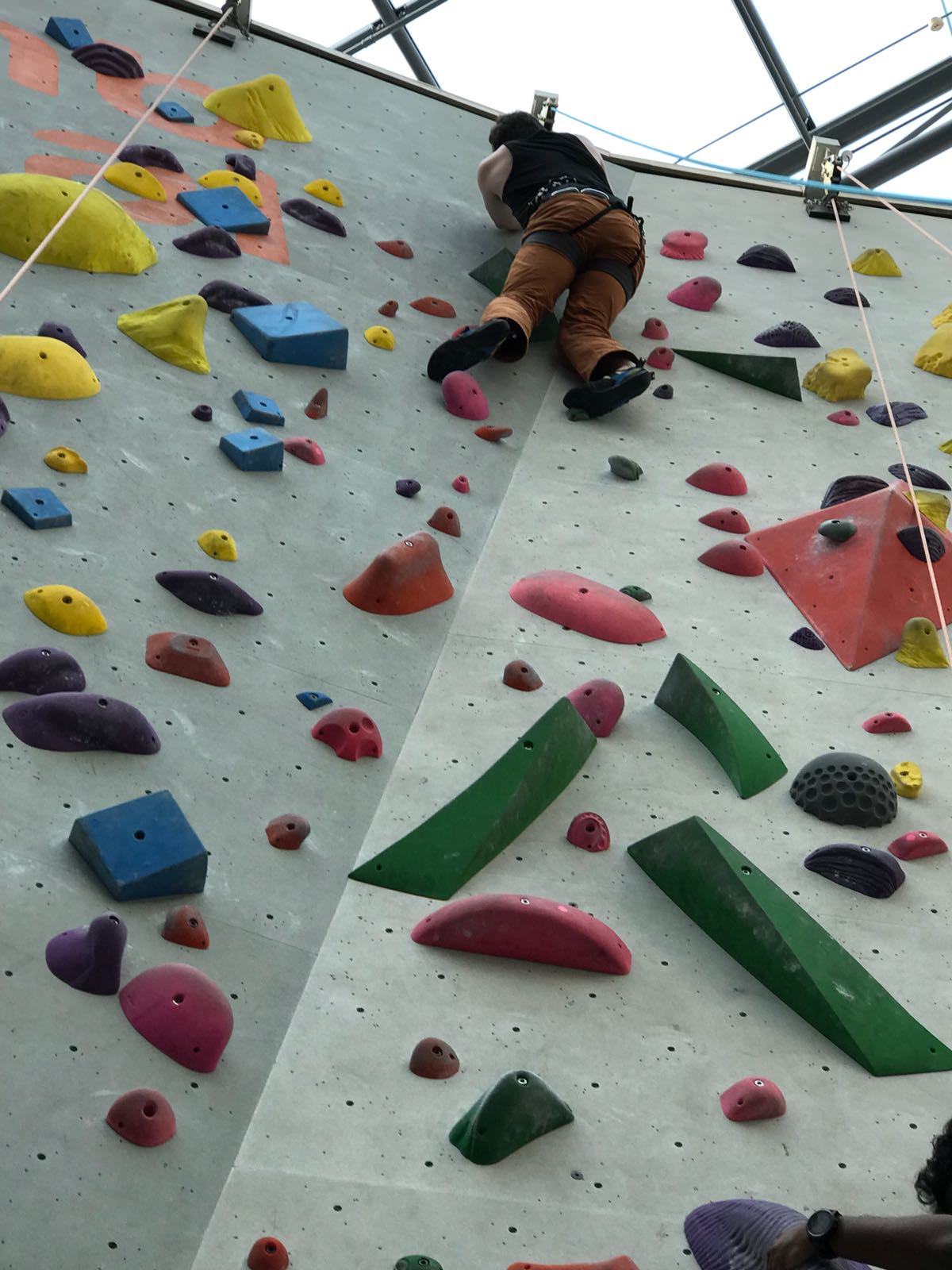 (I’m not cheating, honest – my left foot is flagging, not resting on that pink hold.) I descended as fast as I could and then rushed off to rendezvous with the rest of the family…

… Who were at the Jurong East Stadium, where, improbably enough, La Serpiente was part of the cheerleading squad that went on the field before a Singapore Premier League football match between the Niigata Prawnsnacks and somebody else who wore bright blue. (I’d been in the sun for a bit and was starting to lose my mind.) It took me a little while to get past the security on the gate, because I didn’t have a ticket to spectate, but after I insisted I was only there to watch my daughter and not the match, they let me in.

Cheerleading is clearly a serious business. There were at least twenty or thirty girls on the pitch, and La Serpiente was in the front row, waving her pom poms. I got flustered and forgot to press the Record button on my camera until near the end, but I did get this:

From the stage-frightened La Serpiente of her school concert from just two years ago, to somebody mad to go and wave some pom poms in front of hundreds of strangers, is quite the remarkable transformation. I’m not overly keen on the concept of cheerleaders, but if it’s something that makes her happy and excited, can I really complain?

Afterwards, we bundled them back into another taxi and went home, where I had an online game of Blood Bowl to play and my wife put the girls to bed (a respite for them from Daddy Bedtimes, which I guess made everyone happy – I did get to hose them both down before bed though.)

So that was quite the weekend. I think next week we’ll try to go a bit more gently…

One response to “Climbing and cheering”