My calves were still sore this morning; something of a record, as usually I only suffer for two days after any fierce bout of running. I did 4 km easily and got home just as Felicity was waking up to the eighth month anniversary of being born.

I’d like to say we did something special to commemorate this, like bake her a cake with two-thirds of a candle sticking out of it, but in truth it was a day much like any other: Felicity got fed, I scrambled off to work, and then my wife was left to tend to the child all day.

Because it was pay day today, we had money for groceries, so she went down to the docks, and later on I received this photograph: 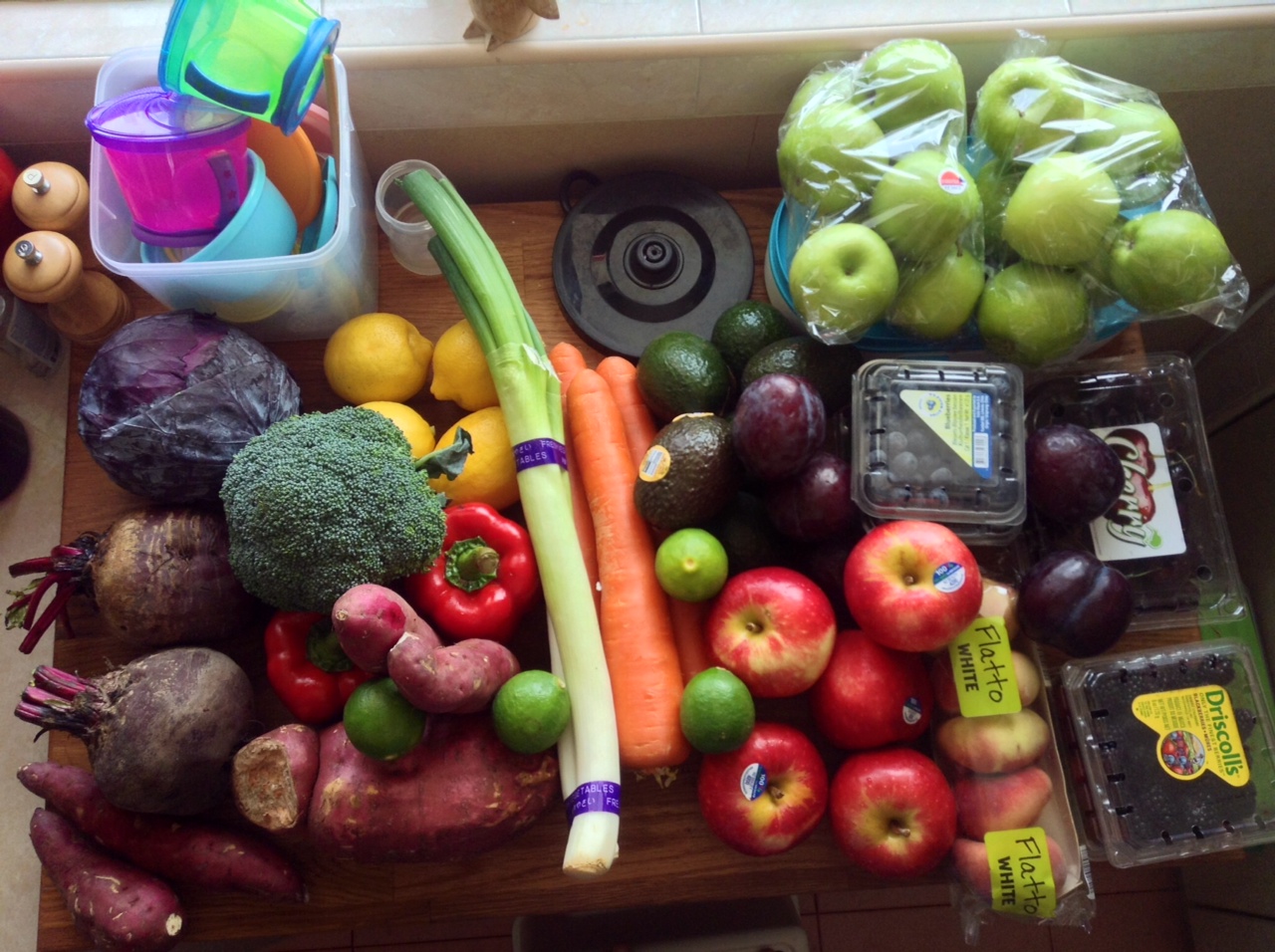 Perhaps I should back up a little bit here. In Singapore, the taxman giveth, but the shopkeeper taketh away. Although I’ll pay an almost derisory amount of income tax, relative to what I’d be paying in the UK, we pay a lot more for groceries. I’m not some upset expat, bemoaning the fact that chocolate Digestives and Marmite are extortionately priced. It’s basic staples, like fruit, or yoghurt, or cheese, or hummus, that are two or three times as much as you’d expect them to be. Don’t even start on how expensive it is to buy anything baby-related, from nappies to breast-pumps, baby wipes to sterilisers, everything is apparently internally coated with gold leaf before it’s shipped here.

But it is shipped here, and that means it turns up on the docks, and if you can be bothered to go down there, rather than the air-conditioned splendour of the supermarket, you can pay a whole lot less for fruit and veg. Admittedly, some of the best looking stuff is kept back for the supermarkets, but that’s only so it can spend a few extra days festering there, rather than at home. If you’ve got a high throughput of fruit and veg, like we do, then that’s not so much of a problem.

Still, it feels a little odd that my wife is going down the docks, supposedly to transact with a bunch of sailors. I entertain strange fantasies that she’s not really getting broccoli and carrots, she’s picking up two keys of Afghan black and a load of baby powder, and cutting it in the spare baby bath before putting it out on the street, but since we’re not drug dealers, and since this isn’t New York in the 1970s, and because the spare baby bath is buried under a huge pile of infant-related paraphernalia (I was going to say ‘junk’ but that would rather upset the thrust of this), there’s no way that’s happening.

Anyway, overjoyed at this haul, my wife sent me photographic evidence. It’s perhaps fortunate that nobody at work was looking over my shoulder and questioning why I’d be spending my time staring at various vegetables. Or perhaps I’d get some sort of prize for eating healthily.

I got home this evening, looking forward to eating vegetables, and from right down by the lift I could hear my daughter complaining. When she gets a yell on, she gets a yell on. Thankfully, the universal panacea is the sight of her father’s face, as I carom through the doorway. This is quite convenient, because the baby ceases crying and happily burbles at me, but also quite aggravating for my wife, because she’s had to contend with whatever fussiness the baby has inflicted all day, only to have her turn on the charm once the man of the house appears. Which suggests that Felicity may share my cruel sense of humour.

Well, that, or Felicity really is sweetness and light all the time, and the supposed temper she sometimes displays is just an elaborate cover story for my wife’s machinations down at the docks, where she participates in bare-knuckle brawling with seven foot tall Ukrainians for hard cash. And, given that every parent knows their child is absolutely perfect in absolutely every single way, what can be the more plausible option?

So, what have we learned from all this?

Eight months is not the most exciting of anniversaries for all involved
Vegetables are good for you, but they’re also expensive, either in time or in money, or in the strange fantasies they spawn in your spouse’s mind
… I’m not sure of anything else