Pete The Cat And His Four Groovy Buttons 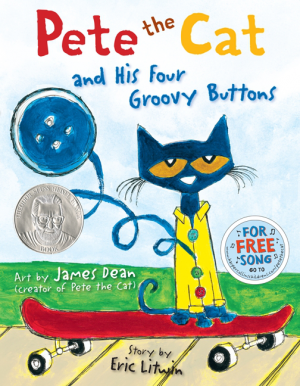 This was a book I chose for La Serpiente at the library a couple of weeks ago. It stars Pete, a real hep cat with a coat with four groovy buttons. As the story goes on, the groovy buttons pop off his coat one by one and roll away. But does Pete get upset? Goodness no! He just sings his song. [That is the entire plot – sorry, I should have flagged spoilers.]

And more buttons pop off. I think La Serpiente had this book read to her at most twice in the last two weeks, but when she chose it today it quickly became clear that she’d memorised the whole thing. She even got the singular of “buttons” when we got down to the last one, rather than sing about “one buttons”, so I was at once astounded and pleased at this. Either she can now read, or (more likely) this is her second go at pretending to be able to read by just applying mimicry to human conversation. Well done, girl.

There’s a free song that accompanies this book. I guess it’s the same as the song that Pete sings, which is admirably simple if a little repetitive. Still, you don’t expect nuance from a blue cat who wears a coat slightly too small for him, a song is quite impressive enough.

After this, I took Destroyer next door and then fell asleep on the floor next to her, about half an hour before she did. I suppose the smooth smooth sounds of the sleep-enabling sheep lulled me to slumber (along with being absolutely knackered from last night’s run and not getting enough sleep for two consecutive nights). I woke just after both Destroyer and her cuddly Clanger had stopped making noises and passed out, and shambled out, off to run through the night. Thus there could be more to say about Pete The Cat but this is not the time nor the place for it. Suffice to say this is a book that statisfies both parent and child, and on a cold Singapore night in January (why the constant rain? it’s been four days now!) this is more than enough for happiness.