Today, after a frustrating half hour of trying to screw a screw into the back of my TV and the thread never biting, I discovered that the bolts for wall mounting televisions come in different sizes. Our TV is a 43″ model, so it needs M8 bolts of an undisclosed length, whereas the knackered TV that was attached to the wall when we moved in has bolts of an ever-so-slightly smaller diameter. So as a note to future selves wondering how to hang a TV on a wall, you need to look at a helpful site like https://removeandreplace.com/2016/10/18/tv-wall-mounting-what-type-of-screws-do-i-need-from-wall-bracket-to-tv/ to figure out what you need. Although it’s odd that anything above 40″ needs M8 bolts, I suppose when you’re putting a 108″ monstrosity on your wall you’re getting somebody in with structural engineering expertise, rather than looking on the Internet for advice.

Moving in continues. Today, the string that you pull to move the blinds up and down in the kids’ bedroom stripped itself, so you have to move the blind up and down by hand. It’s a horrendous blind anyway (near translucent with a horrible illustration of some reptiles in a train on it) so we went to Ikea and bought a curtain rod to replace it (when we moved out, we took our curtain rods with us).

We also bought two carpets, a butterscotch biscuit and some things to put on the bottom of chairs to stop them scraping when we drag them across the floors. Strangely, although we’re on the top floor it still sounds like somebody is moving furniture above us.

I noticed today that on the outside of the second bathroom door, there is a sign: 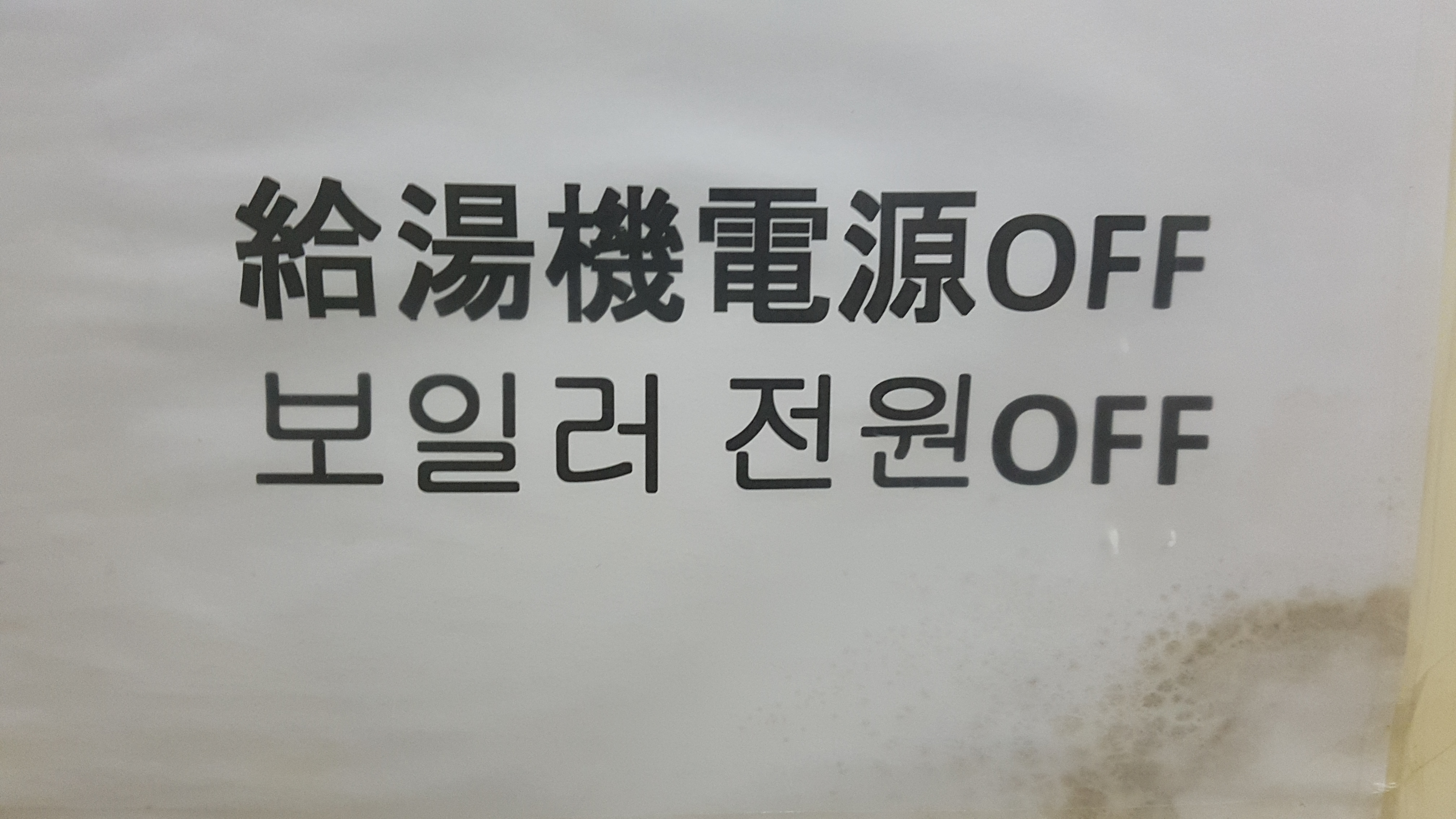 As well as having a nasty stain on one corner, it appears to say something in both Chinese and Korean. Checking with a Korean colleague, the last line is “turn off the heater” which is reasonable as the bathroom has an electric water heater. But this does suggest that there were enough people, appearing and disappearing at a high enough frequency, from at least two different countries, who needed to be admonished to switch off the water heater after their shower, that I suspect the previous resident (who has some mail left in the shoe cupboard) was subletting to lots of transient visitors, which is a big no-no in Singapore. Maybe it was a procession of random men from foreign countries, maybe it was just somebody who lived with at least one Chinese and at least one Korean housemate who were both forgetful, but it points to reasons why nobody had cleaned the cupboards. If it’s only your house for a limited time, are you going to get houseproud?

Anyway, I bought some more varnish and revarnished our kitchen table for the first time in at least four years (it was looking pretty tatty) earning a long (at least a minute) disapproving stare from a neighbour while I sanded it down in the rubbish area of our block. Perhaps she hates poorly varnished furniture.

I also bought a screwdriver for the cross head screws on the TV mount, which is where we started, and I’m glad the bolts don’t fit so we don’t stick some rusty old metal on the back of our almost new TV. There are three different TV mounting plates in this flat (two on opposite sides of the dividing wall between living room and dining area) suggesting the random people who flitted through this place really liked TV. Or couldn’t agree on a station.

Tomorrow, my wife buys bolts. I’m hoping she finds somewhere more helpful than the Internet, which has so far only offered the opportunity to buy a box of 50. On the other hand, it’s translated the sign from our bathroom, so I guess we’re even.