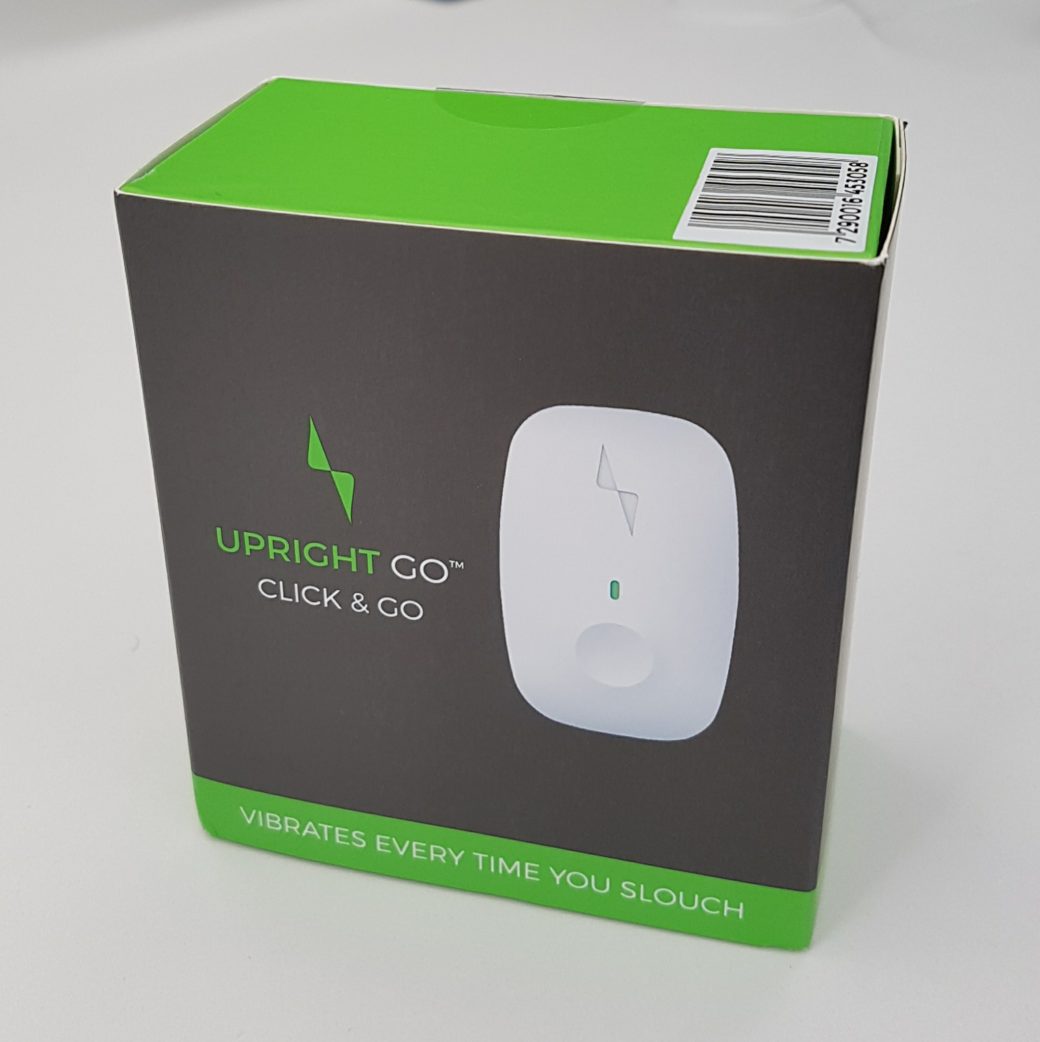 Talk about making a rod for your own back … almost a year ago I signed up to the Kickstarter for Upright Go, and didn’t realise that (for various reasons too dull to go into here) Kickstarter was sending all notifications to a defunct email address. So I forgot all about my pledge, and then in October suddenly remembered, and raged about how Kickstarter projects never work, and always take your cash and don’t ship, and only some time later realised I’d failed to give Upright Go any way to get in contact with me to find out where to ship my device to. A few emails and a bit of form filling later, and a small lump of white plastic was on its way to me. Part of my seventh resolution for this year was to get better posture, and the Upright Go was planned as a key tool in achieving that. Here’s how I’ve got on with it.

Initial setup
The Upright Go attaches to your back, a little below the nape of your neck, using a mild adhesive. You don’t want to use something too strong, because it will hurt when you pull it off, and who wants to have strong adhesives stuck to their skin all day, anyway? When you’ve positioned it, you stand up straight and then calibrate the device via the app on your phone. It buzzes a couple of times, and then it’s on, in Training mode.

In Training mode, whenever you slouch forward, it will wait a few seconds and then start vibrating to alert you. You can configure how long it waits for, and what sort of vibration it makes, and even how far forward counts as slumping. Then each day the app will tell you to train for a longer time. Most of the time you’ll wear it in Tracking mode, when it will monitor your posture, but not provide real-time feedback. That’s partly because standing up straight all day is hard when you’re correcting for decades of bad habits, and trying to fix it all in one go is only going to hurt you. You don’t have to be in Training mode for a continuous period of time – it’s quite possible (and acceptable) to swap between the two as appropriate. But you probably don’t want to go full beast and try to do all your training in one go. Would you think a balance diet consisted of cereal, eggs, bacon, steak and chips, and a salad for breakfast, and nothing for the rest of the day?

Petty annoyances
As I mentioned, the adhesive is not very strong. The instructions advise against trying to use it on wet skin, because it won’t stick. That also means it doesn’t stick if your skin becomes profusely sweaty. That means it won’t stick on if you’re outside in Singapore, or doing any strenuous exercise. In the first three days I had it, it fell off once in the gym (I noticed it on the floor, stuck it in my pocket), fell off while I was riding a bus (slid down the back of my shirt, where I retrieved it) and fell off after I’d walked from the MRT station to my office, and lodged itself between my underpants and the back of my trousers. Imagine how good that looked fishing that out in front of my co-workers. What this boils down to is that it’s useful for making postural corrections in an air-conditioned environment, but I don’t have much faith in keeping it in my possession if I’m walking around outside. So depending on your usage patterns, an Upright Go may be more or less useful. I ended up not using it on weekends, surmising that if the heat didn’t make it fall off and get lost, my children clambering over me would probably do for it.

Secondly, the training can seem a bit onerous. In the first few days I grew to resent the constant buzzing. When I’m stressed at work I’ll hunch my shoulders, and that would make the Upright Go buzz more, and that would always make me stressed, but it would make me even more stressed to admit defeat and switch from Training to Tracking mode, and so I’d hunch more, and it would buzz more, and… Basically, don’t try to use it when you have a lot of other stimuli to manage. Be more resolute about being in Tracking mode, and don’t beat yourself up.

Thirdly, if you’re training for 10 minutes, that’s not 10 minutes of attempting to stand up straight. That’s ten minutes of standing up straight, and if you slump a lot and fail to stand up straight, a 10 minute training session could easily be 20 minutes long or longer. I didn’t appreciate this for a while, and really didn’t appreciate how the seconds on the timer never seemed to be moving down. I guess if you’ve read the instructions, or failing that, this blog, this shouldn’t really be a concern for you.

Finally, walking around while trying to stand straight feels really odd. Wrong, even, but I think this is a sign of how used I am to standing badly.

Impact
It’s harder than I expected it to be. But within a few days, people were remarking on how good my posture was. I’m unsure if that’s because they had been primed by me telling them I was using an Upright Go (time for a double blind experiment?) and I’ve got some scepticism about how good a few gyroscopes and some algorithms can really be, and my usage has been at the same time as a fairly strenuous exercise regime that might also be doing good things for my posture, but those things considered, I do feel that I’m standing and sitting better. When I do take it off, I sometimes sense it there, even on the weekends, and that’s a cue to stand straighter. I suppose partly it’s because it teaches you what standing straight feels like (and then you learn that isn’t so unnatural after all, and adjust your posture to fit).

After 20 days, your training is complete. The advice after that is to try to do 2-3 20 minute sessions 3-4 times a week, to keep yourself in check – I’ve left it alone since yesterday, but I’ll start wearing it again after my trip to Kuala Lumpur, just for tracking purposes, and see how that’s gone. The other acid test will be to compare the photos taken of me at the start of the month, with how I look at the end. But there’s a few days remaining for that…