The first week isn’t the hardest 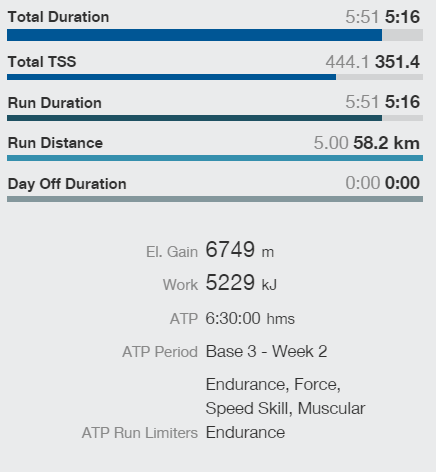 This week I did all but one of my scheduled runs; the last one today, an easy recovery jog, I figured I’d skip after spending all of Christmas Day drinking prosecco. If you look at this summary, I’ve almost exactly doubled the distance I’ve run vs the previous week, but my TSS (the indication of how much I’m hurting myself) has only increased by about 50%.

That’s because I’ve been disciplined about following what my powermeter tells me, and also because my training plan has a lot of run-walk sessions – good for getting the miles in, not so great for the apparent average speed. But it seems to have paid off – I ran 10 miles today and the last time I did that I was absolutely hanging (three months ago to the day; the same time to do the same overall distance, but last time I wasn’t stopping every five minutes intentionally to take a bit of a rest). I was disappointed that I can’t run down slippery metal bridges in the dark (my body sensibly tensed up and slowed me down on the descent of Mount Faber) but otherwise everything seems to have gone to plan.

You can see that from the power charts (one bar per lap). The Training Peaks default, gloomy grey on a gloomy grey background, isn’t so easy to read, so I’ve put it into Excel to make it a bit more legible.

The target power for the session was between 271 and 296 watts, as marked by the red and green lines. Apart from two laps (when I was gingerly stepping down the metal bridge from the top of Mount Faber, and then when I was negotiating traffic lights at the bottom of the hill) I’ve kept my output in the target zone throughout. That means not getting too worn out from running too hard, and not getting too unfit from not running enough. And I managed that with a 5:45am start on Christmas Day – so hopefully I’m exercising my willpower too.

The thing that has been tougher this week than expected was when I did my power test on Monday (run for half an hour as hard as you can and take that as your threshold output). That pushed up my power targets by a good 20 watts, which means I’m not running faster than I was before, but also pushing quite a bit harder than before. I suppose that means I was slacking off in previous weeks (things did feel a bit slow, but I was trusting the powermeter perhaps too much – if you set a low maximal power output, then your zones, which are just percentages of that, will by necessity be too low) but the adjustment upwards ia a little tough. It will be tougher tomorrow – I have half an hour at marathon pace in the calendar.

Oh, and I finally destroyed my powermeter’s chest strap. Since the start of November when the glue of the strap perished under the onslaught of my perspiration, I’ve been holding it together with a safety pin, but 500 yards from the end of the parkrun yesterday it failed completely and fell apart, leaving me to run home powermeter in my hands. But since it’s Christmas, I got home in the afternoon to find a DHL’ed packaged containing two brand new straps, which means my ability to train to power remains unaffected.

Oh, and it was Christmas today, which was nice.

One response to “The first week isn’t the hardest”