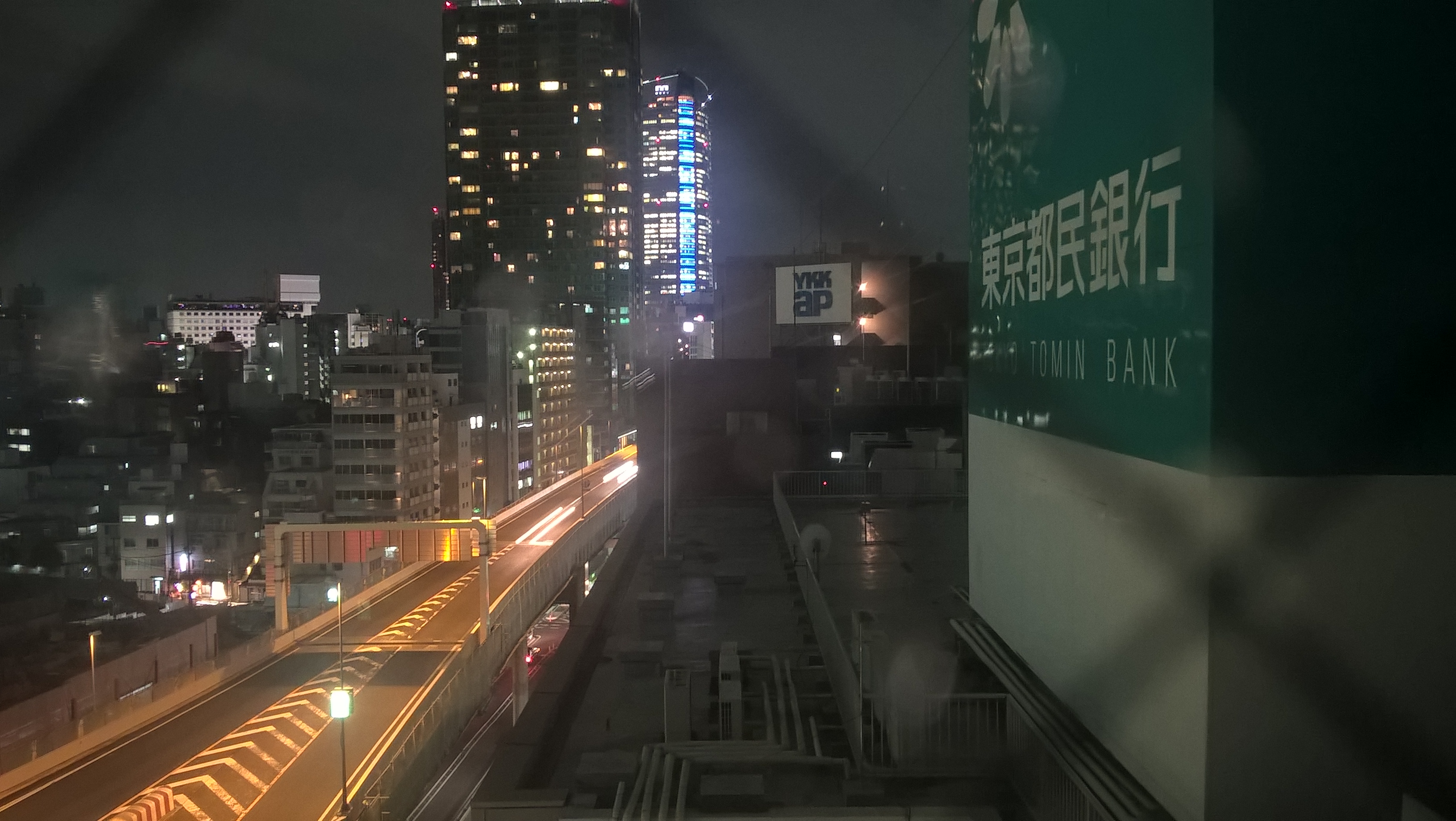 I don’t have the most awe-inspiring view from the window of my hotel room (unless you like seeing traffic rushing past on the freeway, or Roppongi Hills rising malevolently in the distance).

Roppongi is a strange, depressing place.

I woke up this morning at 6:30 from a bad dream. I was back in my old student hovel, and I was being harassed by somebody from one of our clients, in between inadvertently breaking the padlock on the back door and taking a shower in a bathroom that, on reflection, was the combination of all the worst parts of every bathroom I’ve ever been in. I’ve no idea what this signifies, but I doubt it’s anything good.

I woke because the curtains had been drawn yesterday when my room was cleaned, and I’d been too dumb to realise last night. So a pale white light washed over me and prevented more sleep. I gave up, got up, went to the office.

I don’t have a key to get into the office, so I went on to Roppongi Hills, that brooding monstrosity in the background. It’s quite the anomaly: a gleaming skyscraper in a grimy area of Tokyo. All around it are seedy bars, drunks staggering on the street between touts chasing after passing gaijin, a thundering expressway, and crappy convenience stores. A big sign for “Sexy Zone” is not an example of a minimalist, Zen aesthetic. Roppongi feels like pre-clean-up Times Square in New York, with the excitement erased and the grime left. Is that just because we expect Japan to be cleaner than it is?

I trudge up the hill to this. At the foot of Roppongi (hill) there’s less seediness, more soulless car parking and uninviting doorways, so unlike Dante’s descent to hell, it’s as I go up in the world that things get worse and worse. At the top, as I reach the same altitude as the bottom of Roppongi Hills, there’s a sulky girl sitting on the lap of a drunken emo lid, sprawled in a shop doorway. There is nowhere nice for breakfast.

Fortunately, inside Roppongi Hills itself is the antiseptic, unassimilated space that Starbucks provides. I purchase too many baked goods and go outside, then realise I still won’t be able to get into the office, so I sit for a time and watch the world go by.

Which is another parade of misery. Every man walking into Roppongi Hills Tower looks like their spirit was broken. How do you get to have shoulders that slump and hunch simultaneously? Each man is carrying a bag that must weigh them down with half their sorrow, by the looks of it. There are hardly any women at this hour, just man after man in dark suit, white shirt, crushed demeanour.

Later, I’ll be in an office far from here, looking at a huge photo of a group of staff members. All the men have suits, all the women are wearing exactly the same outfit, as if it’s saying here are the fine executives of the company, plus three of our best receptionists. They are smiling though. Maybe that’s because their office isn’t in Roppongi Hills.

I spend the day mostly travelling towards or away from Roppongi Hills. Traffic crawls and Tokyo is a big city; three hours of nausea is like a harsh reminder of childhood summer holidays. But there’s light relief when our taxi driver gets pulled over by the police and fined. Well, I was relieved. But then we were heading away from Roppongi.

I miss my wife, I miss my kids, but I don’t think they’d much enjoy accompanying me here.