In the toilet on the ground floor of the office building where I work, there’s this sign. It’s worrying that such a sign is necessary; do people really need to be told not to stick paper towels into urinals? And what sort of education provides somebody with the literacy to read this sign, but fails to inculcate basic principles of plumbing?

This isn’t isolated just to my current office. At my last employer, there were also warning signs in the toilet, telling you not to stick paper towels down the toilet. Come to think of it, the only signs there were in the facilities on the floor where I worked, and not in the rest of the office. Maybe the problem is with me. Or with the people I select as coworkers.

I spend a lot of time in toilets, those stinking cloisters of contemplation and defecation. In Singapore, it seems that it’s quite normal to strike up a conversation with somebody else in the gents. This is not something that men in Britain would do. A toilet there is a place of unease, where you get in and get out as fast as possible (and, according to research, 50% of the time not washing your hands) whereas in Singapore, or at least in my office, it’s a place for banter.

The toilet is nicer than the one in our flat, which is a windowless box which could double as a sauna if it wasn’t for it having a toilet in it. And millions of ants. Still, I feel one sort of business should be conducted there, and no others.

Still, every nation has a different relationship with toilets. One way Singapore is different is the rule about urinating in lifts. (You must not do it.)

I’m not sure if that’s a real law, or an urban myth – one of those things everyone knows about Singapore, that sounds fairly implausible. The other canonical example of this is that it’s illegal to walk around naked inside your apartment – quite apart from the censoriousness and the victimless nature of this crime, it seems like anyone gathering evidence has problems of their own, to do with telephoto lenses and other people’s body parts. And I’ve never been arrested for being pantless in my kitchen, but is that just because I live on the top floor and nobody can see in to report me?

The prohibition on peeing in lifts is supported by urine detectors, which will halt the lift, call the police and lock the doors if any bladder malfunction occurs. And again, if you have so much urination in lifts that you need to install specialized monitoring and imprisonment equipment, I’d argue you’re just fixing a symptom and not addressing deeper problems. Plus, this is something that seems ripe for abuse: what’s to stop pranksters tossing bottles of piss into lifts when other people are inside, then legging it while the poor bystander is left to get blamed for everything?

Again, I don’t think you’ll have a wave of civil disobedience based on chucking around bodily fluids, but why leave the opportunity out there?

The one good thing I can see about uncontrolled peeing in lifts is that it might make people politer in other ways. For example, when you’re in a crowded lift and there are ten people between you and the door, perhaps they might realize they need to move to allow you to get out at your floor, and do so more quickly if there was a risk of getting their trousers sprinkled with dilute uric acid. Again, I’m not saying I want to pee on anyone, but when it feels like every person in a lift is thinking General Petain’s famous maxim "Ils ne passeront pas" you begin to contemplate desperate measures.

Or at least think about putting a sign up. 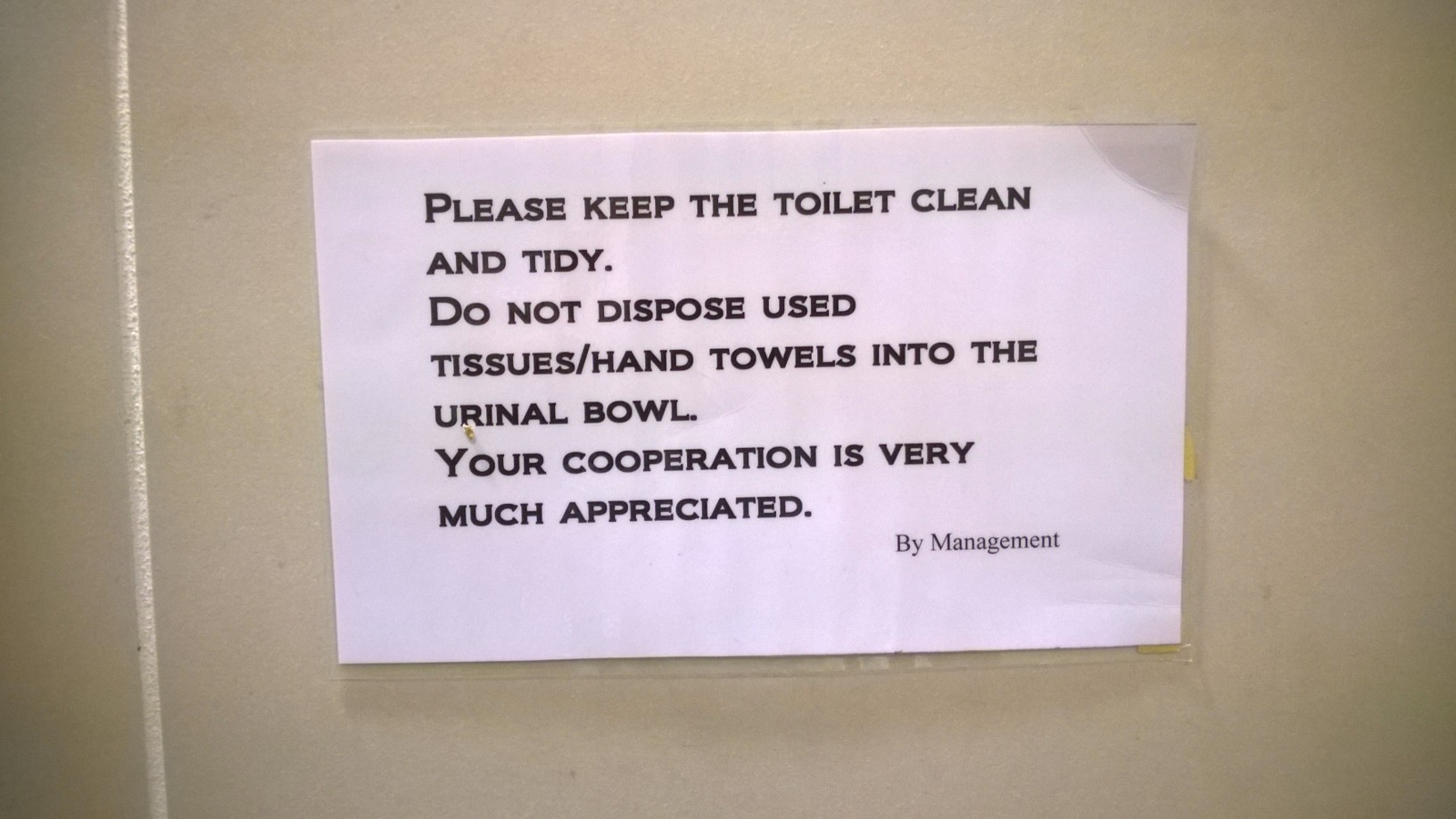 One response to “More toilet conundrums”