I didn’t sleep at all well last night, probably because of my late night phone call, so after getting five hours rest I went to work feeling a little fragile. I didn’t so much wake up this morning as feel that I was attending my own wake. This wasn’t good preparation for today, which I spent in a state of total panic, feeling that I was incapable of either doing anything intelligent or achieving anything. This was only worsened by it being the office Halloween party, where everyone else was busy having fun while I was swearing at my computer or on phone calls. Or on phone calls, swearing at my computer.

When I got home this evening, after going to see Goosebumps at the cinema (so-so; Jack Black isn’t as annoying zany as he can be, but it was a bit long and didn’t really make sense if you weren’t an aficionado of the children’s books (or maybe even if you were)) I had another fight with my camera’s memory card before finally downloading and processing photos from two months ago, along with photos from this morning where we dressed La Serpiente up for Halloween as a bee. 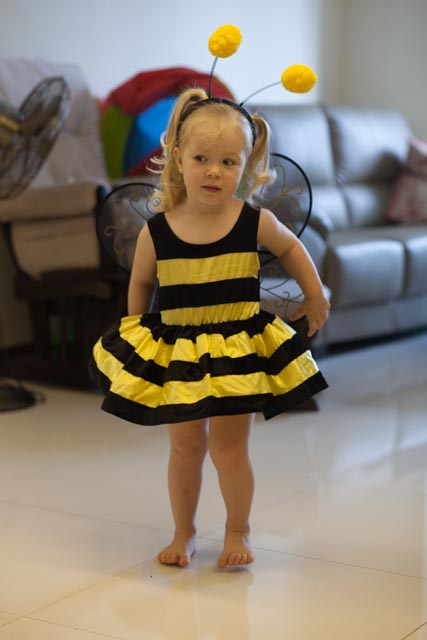 Which is, I assume, because people are horrified by the thought of honey. You’re eating the excretions of insects. It’s a short step away from cockroach snot, basically.

As well as the bee pictures, which I think turned out nice, I discovered photos of my eldest on the swings in Crease Park, Beckenham. I’m glad that even in this digital age, the old experience of finding photos you’d forgotten you’d taken on an old camera film can be retained, just be being disorganised and not having a proper workflow for managing your photos. 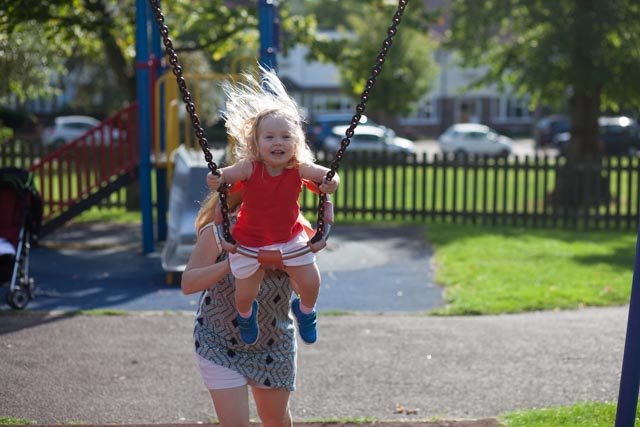 Looking at this photo, I was reminded of one of the first times we put La Serpiente in a swing, on Bainbridge Island back in 2014, just before her first birthday. She didn’t look quite so impressed then. So it’s good to see that with time, and longer hair, she’s now happier to be going flying through the air.

Speaking of the air, the haze has been away from Singapore for a second day. I’ve got my bicycle out of the bomb shelter and pumped up the tyres, in preparation for a ride to the East Coast tomorrow for my first Parkrun in what feels like six months. It can’t be that long. Can it? Thus I need an early night. Or at least down before midnight.

Nothing Much In Particular
nostalgia, photos, swings