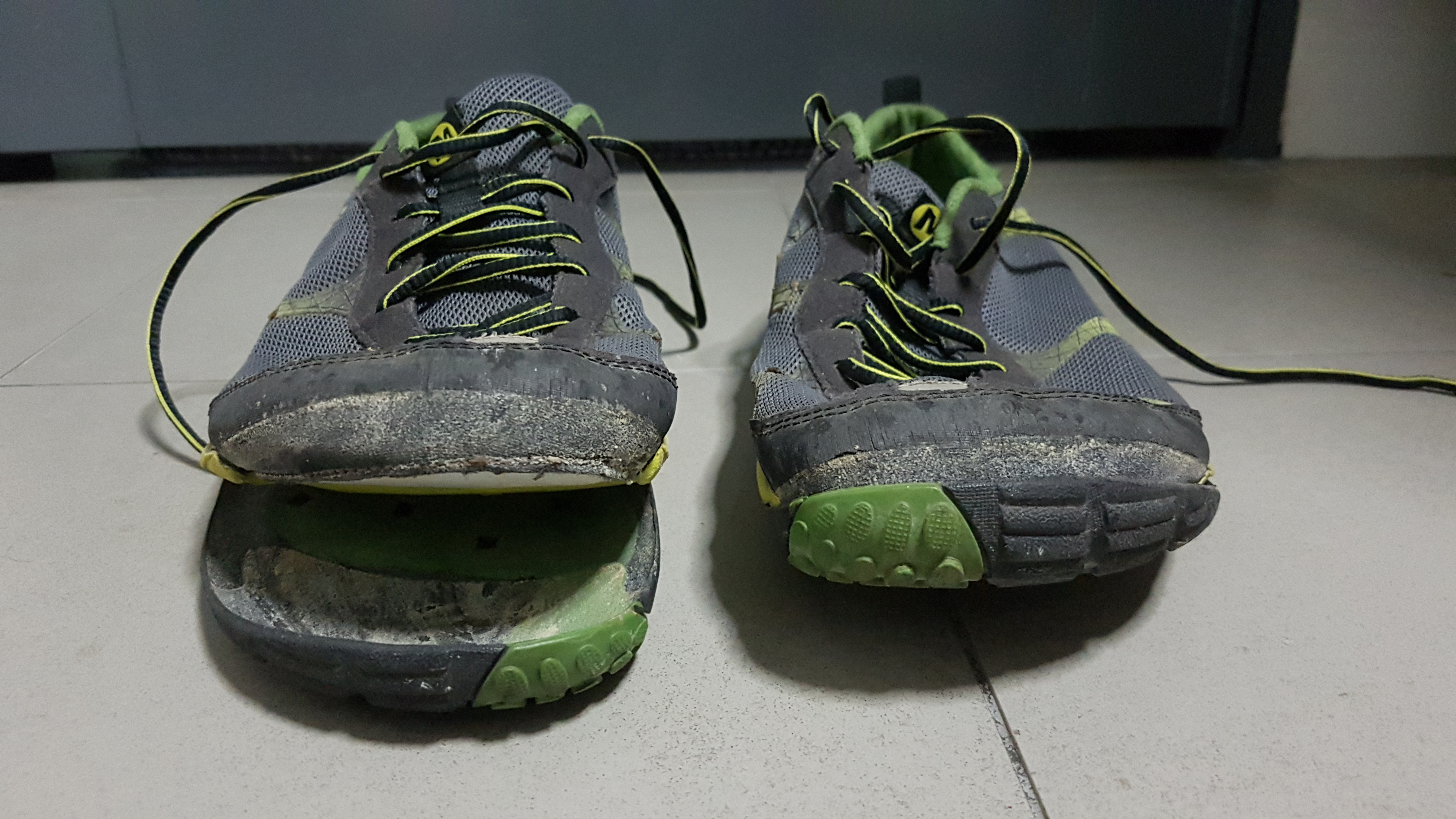 Two and a half years after the Singapore climate claimed a perfectly good pair of shoes, I have another victim: my Merrell Roadgloves, an incredibly comfortable pair of shoes from the height of the barefoot running boom. (And thus at least five years old, but it’s the mileage, never the age…)

We had friends’ two year old son staying with us this weekend, and as well as a 2am wake up (which was fine, honestly, because I couldn’t sleep because of the antihistamines I’d taken to stop my nose from running yesterday) there was also the 6am reveille when he and Destroyer got up and began their running battle with the adults (and kept egging each other on to new heights of misbehaviour like sneaking out to the lift and attempting to go out on an adventure) and the 7:30 raid on my face by all three children when I was still trying to ignore the noise.

In the morning, I spent most of my time looking at potential apartments. Some good, some odd (or at least odd to me; it’s beginning to seem like it’s normal to have no cooking appliances in a kitchen here, because who cooks anything, right?) All the kids were adamant that they didn’t require naps, and then passed out cold, as did my wife, who had been planning to visit more flats but had been up since 6 (see above). So I went out at 2 and saw three more, including an incredibly tidy and we’ll renovated unit that was owned by a shipping captain, and another lovely unit just above ours, with a better view of the sea but no stovetop and a suspicious wire hanging out of the bathroom ceiling.

And then everyone woke up except my wife, and I had to take the kids out to get her some peace, and that involved a big row about whether they could bring two plastic Halloween baskets filled with fake food or not, and then latterly why it was so unjust that I was refusing to carry their two plastic Halloween baskets full of fake food when they got bored of them. At least I had the opportunity to buy some posh cheese.

What I’m saying, in a very roundabout way, is that I didn’t have any chance to work on my strength training exercises all day, until about 5pm. I have an hour of bodyweight exercises to do twice a week, which at least doesn’t require a collection of weights or other equipment. So it didn’t matter so much that by then, the climbing gym was shut. Instead, I went to the local exercise area, which is suboptimal, because although there is a chin up bar, it’s surrounded by a small mob of small expat children, bereft of spatial awareness, drawing on everything with chalk (so if you try to do some chin ups, you risk kicking Tarquin in the face), and it’s oppressively humid because it’s outside and you’re in Singapore. There’s also usually various characters, including but not limited to: very old uncle sitting on the exercise equipment and doing nothing, nonagenarian couple with small baby and endless supply of litter that keeps dropping on the floor from their pram, cynical teenagers (but they think they grew up on the grimy streets of a major conurbation like New York, when they’re just soft bellied suburbanites) and men with zero percent body fat, stripped to the waist, doing the splits while standing upside down.

The kids and my wife (now reenergised by sleep) accompanied me, and after half an hour our houseguest got bored and ran off. My wife was grappling with our two girls so yelled at me to give chase, at which point (and only then) did I discover the soles of my shoes had detached from the uppers and were flapping all over the place as I ran. To be exact, the front halves were loose and flapping about, and it was a struggle not to be tripped up by my own feet. That’s no way to get fit.

Still, child retrieved, I returned and finished my exercises just as the rain came in, then took my shoes off and walked barefoot to the lift, lamenting my loss. I suppose it’s one less pair of shoes to have to pack for when we move.