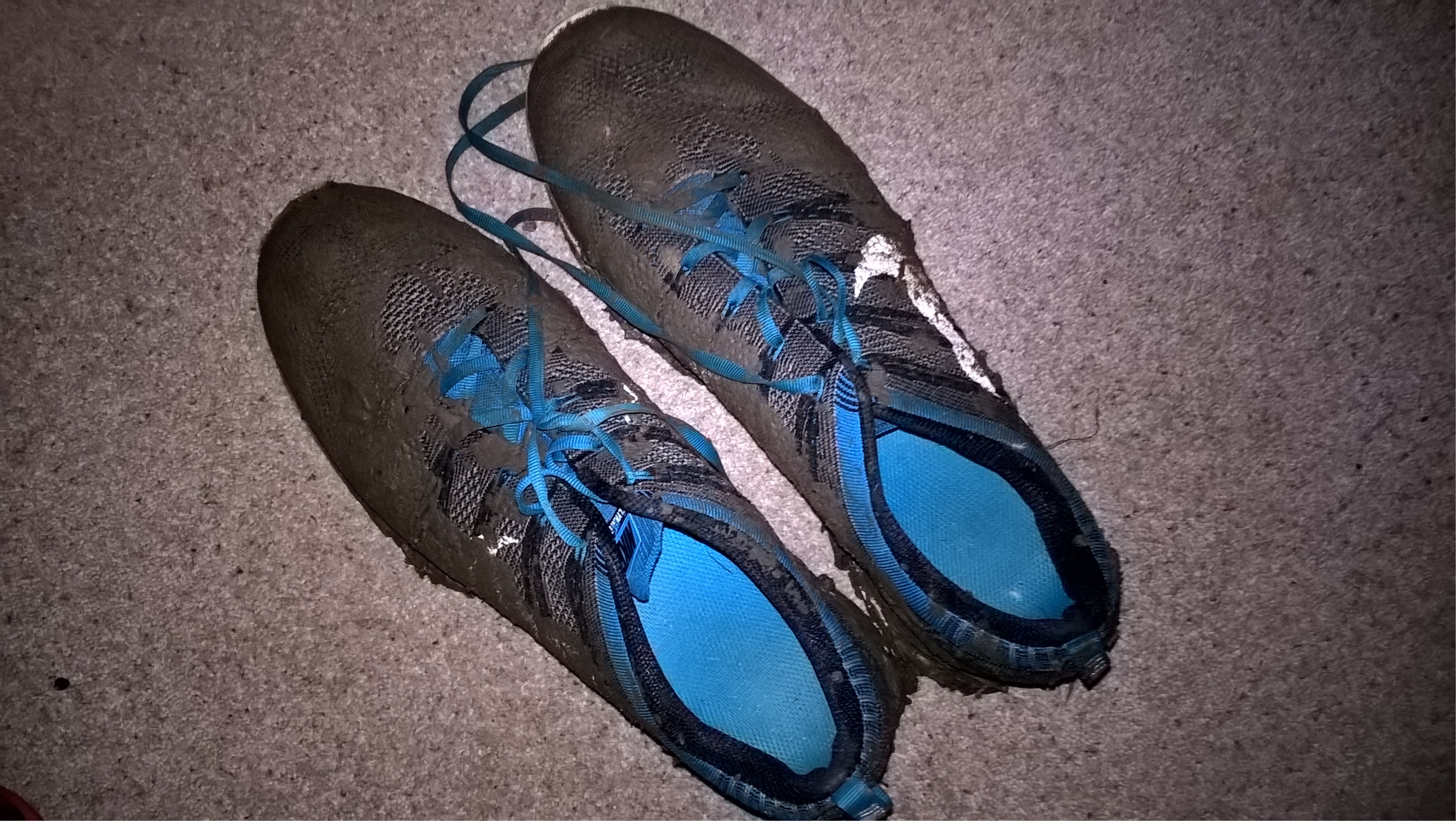 This morning I woke about eight, suitably dehydrated and hungry after last night’s New Year celebration, and after a breakfast of porridge, headed off to Croydon for my first run of 2016.

The Lloyd Park Parkrun is two laps of the park, and at the briefing they warned how slippery it would be.

Fortunately, I have lots of pairs of trail shoes with deep treads and lugged soles to cut through mud and make it easy to run in these conditions.

Unfortunately, all my trail shoes are in Singapore.

When the run started, everyone seemed to be taking it very easy, so I ran past most of the main group as they rounded the corner of the café. That was just before we hit the mud, mud that covered the remaining 4,950 metres of the course.

My shoes were terrible for the mud and I was slipping and sliding all over the place. When I reached the first hill it got much worse, as the mud made it so slippery that I was almost sliding back with every step I took. Going downhill was just as bad as going up: more skidding and panicky steps as I tried to stay upright.

In a few places, the mud was so thick and deep that it sucked at my shoes. I was terrified that I’d go home barefoot. I wasn’t the only one out there having problems: as I crested one hill, I saw a man bent over double, swearing at his shoes. “I can’t believe this is happening” he wailed as I went past him, and then blazed past me as soon as he got his shoelaces figured out, or whatever he had been struggling with.

Finishing the first lap, a woman running alongside me struck up a conversation about how long I was over from Singapore for, then vanished into the distance while I laboured on. I did the first lap in just under 13 minutes (I’d been hoping for a 20-minute time) and I knew then that this wasn’t going to be a good time.

On the second lap I enjoyed myself a bit more, now that I was resigned to surfing across a bog for the next quarter of an hour. It was still bitterly cold, and my shoes were probably three times their normal weight now that they were covered and soaked in most of Lloyd Park’s topsoil, but at least I knew what was coming this time around. Mostly, that was people who had suitable footwear, running straight past me. Oh, how stupid that first sprint felt as I slithered down the order.

I still had it in me for a last sprint to the end, narrowly averting coming in 74th place by coming in 72nd instead. Insensate from the cold and the exertion, I stood uncomfortably in the queue for the results, while my father tried to make conversation and I tried to speak. Then we went home, and instead of going back to bed like any sensible person would, I was off to Bromley to shop for luggage.

One response to “Lloyd Parkrun”