It’s been over a month since I got my Nokia 920, long enough to familiarize myself with it and to start to understand what’s good and what’s not so good with it.

Writing this blog every day, I thought I’d be back on my Blackberry very soon, but the onscreen keyboard is good enough that I’ve typed every entry on it since I started. The Blackberry gathers dust, alone, unloved. Auto predict works wonderfully well; there are times that I could write full sentences from the predictions, and it’s nice the way a double-tap of the space bar produces a full stop, just the way I’m used to from years of Blackberries.

It’s not perfect: for a week it inexplicably forgot that a single "i" should automatically be uppercased unless you say otherwise, but that ability mysteriously restored itself a few days ago. It doesn’t make good use of the screen that’s available: in portrait mode it could easily be wider, instead of making me enter erroneous commas between every other word. And, the curse, of all touch screen phones, it turns you into a shambling idiot who fails to notice their environment, which the Blackberry, at least when you could touch type, never did. 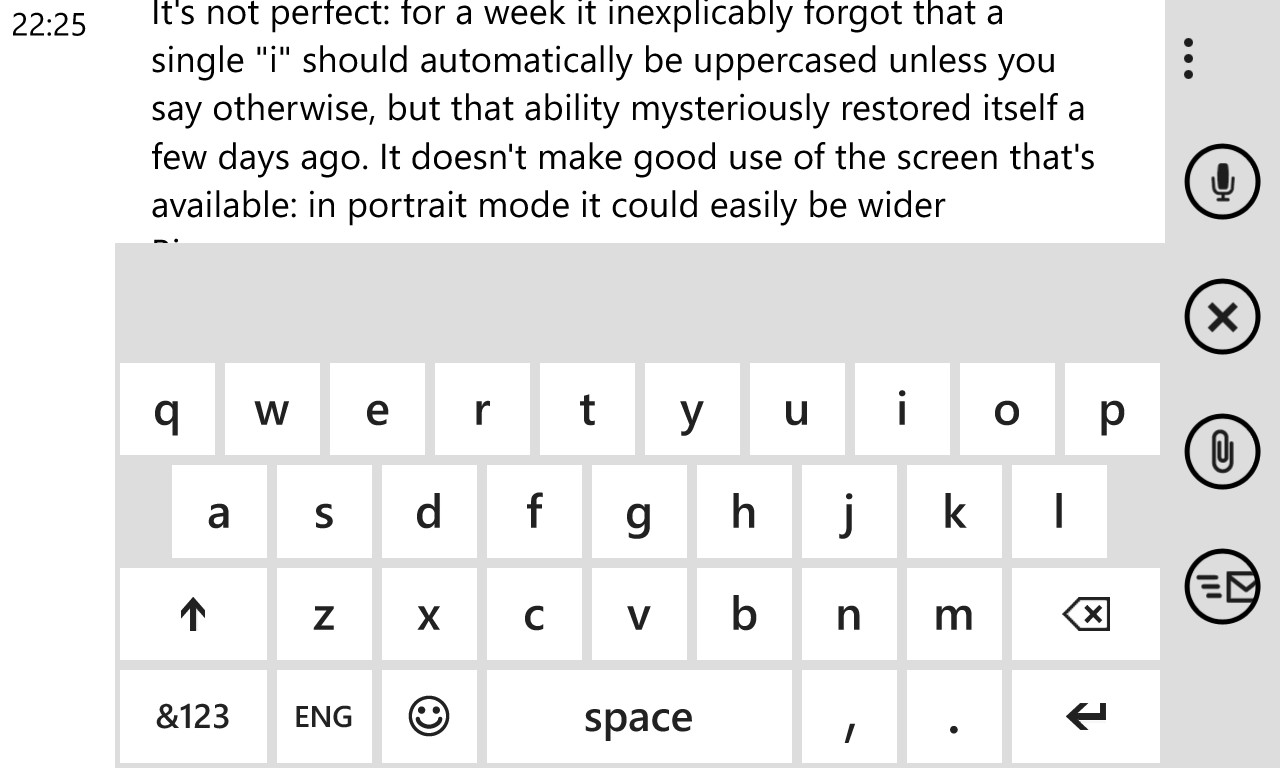 The apps are improving. Facebook was basically rubbish until last Wednesday night, when suddenly it went to version 5 and has features and looks nice and all that jazz. Transport apps were almost worthless out of the box, but again, a new release of Nokia Transit arrived about three weeks ago and now the phone is genuinely useful for figuring out how to navigate the public transport mazes of Singapore. Kindle for Windows Phone 8 is still fundamentally broken. Page navigation is horrid (even if you forget about the way some pages in books go blank at random), you can’t resize text, and sometimes it gets all confused about which books you’ve downloaded and which you haven’t, and needs a full power off and on to fix it.

There are lots of camera apps, but they’re the ones I want; I can shoot photos, edit them and then upload them to Flickr, all from my phone. Instagram? No, I’m too old to even know what that is. There’s quite a lot of duplication – do you need Bing Music and Shazam? Or Xbox Music and Nokia Music? Or the aforementioned million camera apps? But choice can be a good thing. Still no Candy Crush. That’s a good thing.

No orientation lock is a bad thing; there are lots of times when the screen flips to exactly the way I don’t want it, then stays there, leering at me. It’s sometimes galling that the homepage remains in portrait mode no matter what, but I suppose that’s a design decision that somebody justified somewhere. And there’s no Google Docs support between viewing files on the web browser.

Then again, you get Microsoft Office, and OneNote, which has been invaluable for my wife and I to share shopping lists. She writes them on her iPad while I’m trotting out the door, and I arrive at the supermarket, a technological hunter-gatherer ready to retrieve roast chickens. If you’re buying a Windows Phone it’s probably because you’re somewhat invested in the Windows ecosystem. We’re rather homogenous; we have a Mac Mini, an Xbox 360, a Windows 7 laptop (happily now repaired by Asus after the first repair did nasty things to it) and an iPad Mini, which I guess means we’re scared to commit, but they play together reasonably nicely.

Then there’s Bing. If you live in the US, it’s lovely. It seems pretty much as good as Google for searches, maps,,and other functionality like stock quotes and arithmetic.

If you don’t live in the US and can’t fool Bing into thinking you do, it’s a bit rubbish. Swathes of functionality seem to be missing and result quality just doesn’t feel so good. Maybe nobody at Redmond cares that much about the rest of the world any more, but you keep wishing they’d get it together. Or have some Google apps. (Which I guess are scheduled for the same day as Lucifer’s Inaugural Ice Skating Contest.)

Conversely, people in the US can’t buy the official Nokia colour-coordinated silicone cases that you can get here, so perhaps that makes up in some small way for having ghetto-Bing, the unloved search engine that the rest of the world just isn’t too amazed by…

The camera is great. The battery, less so. I get a day’s usage (mostly) but it gets quite hot, and the inductive charging, while quite cool, hardly revolutionalised my life. I guess plugging a USB cable into a phone isn’t that onerous a task. Data connectivity is strange. Sometimes I can happily surf the web, but apps like Facebook or search will complain there’s no data connection. I don’t know whether to blame that on Starhub or not, honestly.

The other thing I miss is having lots of profiles. With this phone, either it’s silent for everyone, or for nobody. There’s no selective volume so that if your wife calls to inform you of impending labour, you notice, but you don’t get distracted from meetings by random sales calls. Maybe I could bluff that by assigning everyone a silent ringtone except my wife, but that’s a pretty horrible workaround.

Other than that, I really like it. It’s odd how quickly you get used to a phone (and strange how annoying I now find the physical home key on Apple devices, after the touch-but-no-click on my Nokia) and after so long in the barren wastelands of Blackberry land, I suppose anything would feel wonderful, but maybe it’s just nice to feel a little different. Everyone wants to feel special, after all, even if everyone wants to feel normal.