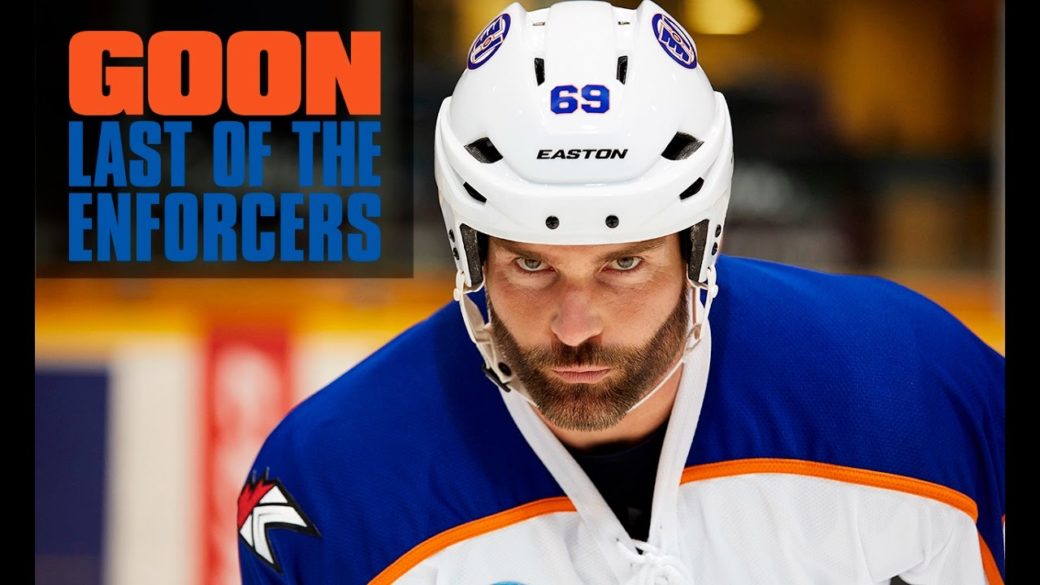 Sean whatshisface (sorry, Sean William Scott, or The Artist Formerly Known As Stifler From American Pie) doesn’t show up very often these days. Perhaps Bulletproof Monk (my favourite Chow Yun Fat film to include Nazis in the Himalayas, white guy appropriation of King fu and a man angrily shouting "Moooonk!") was neither a critical or commercial success. But Goon, a sports biopic set in my wife’s home province of Nova Scotia, where Stifler plays a dunderheaded Jewish bouncer with a talent for taking a punch, and Liev Schrieber has been briefed that a Canadian accent just means saying "eh" at the end of every sentence, was a surprise for me.
The first time we watched it, we laughed uproariously. It was your regular sports biopic with montage, an underdog, etc, but it was also scabrously obscene and the protagonist was no sportsman, just a punching machine. And I’m loyal to my adopted hometown of Halifax, which has only ever appeared in the horrible, horrible Rutger Hauser vehicle Hobo With A Shotgun, a counterpoint to wilful ironicism as strong as going to Soi Cowboy in Bangkok "for a laugh".

The second time I watched it, I was gobsmacked at how violent it was. Yes, it was still funny, but had I overlooked how the first five minutes were just a man being punched in the face until his teeth fell out. Like George Orwell’s prediction of the future, but on an ice rink.

I don’t think Goon was a massive success, but clearly enough to justify a sequel showing up on Netflix. I was worried it would be a travesty of everything I liked about the first film, but I was happily surprised.

Doug, Stifler’s character, a guy so dumb it’s revealed he spells his own name "Dug", is retiring from hockey, a baby on the way. Well, he’s forcibly retired when Anders Cain, a terrifying Viking monster who happens to be the uncanny progeny of Goldie Hawn and Kurt Russell, punches him into oblivion, then takes his place as captain of the Halifax Highlanders.

Cue early midlife crisis about giving up punchjng people in the face for a life as an insurance salesman (the scenes in the basement of Cornwallis Insurance, complete with autoerotic asphyxiation, are staggeringly hilarious) followed by a redemptive arc as Schrieber, Doug’s nemesis from the first film, teaches him to skate and fight again (and play hockey without punching people), finishing with Doug beating down the evil incarnate that is Anders Cain, and in the last punch of the film destroying the rest of his career in order to end Cain. Oh, and some horrible bullying of the goalie by the Ukrainian midfielders, and a lovable Finnish doofus who spends the film giving his teammates licorice and beaming.

So it’s more of the same, but retooled and improved: not just Goon: The Greatest Hits. The first film had nothing to say about the aging process and how life becomes a series of compromises, but the second film doesn’t lose the dick jokes or the spectacle of grown men yanking at each others shirts and punching each other. A success, then, and one that carefully slams the door against a threequel.