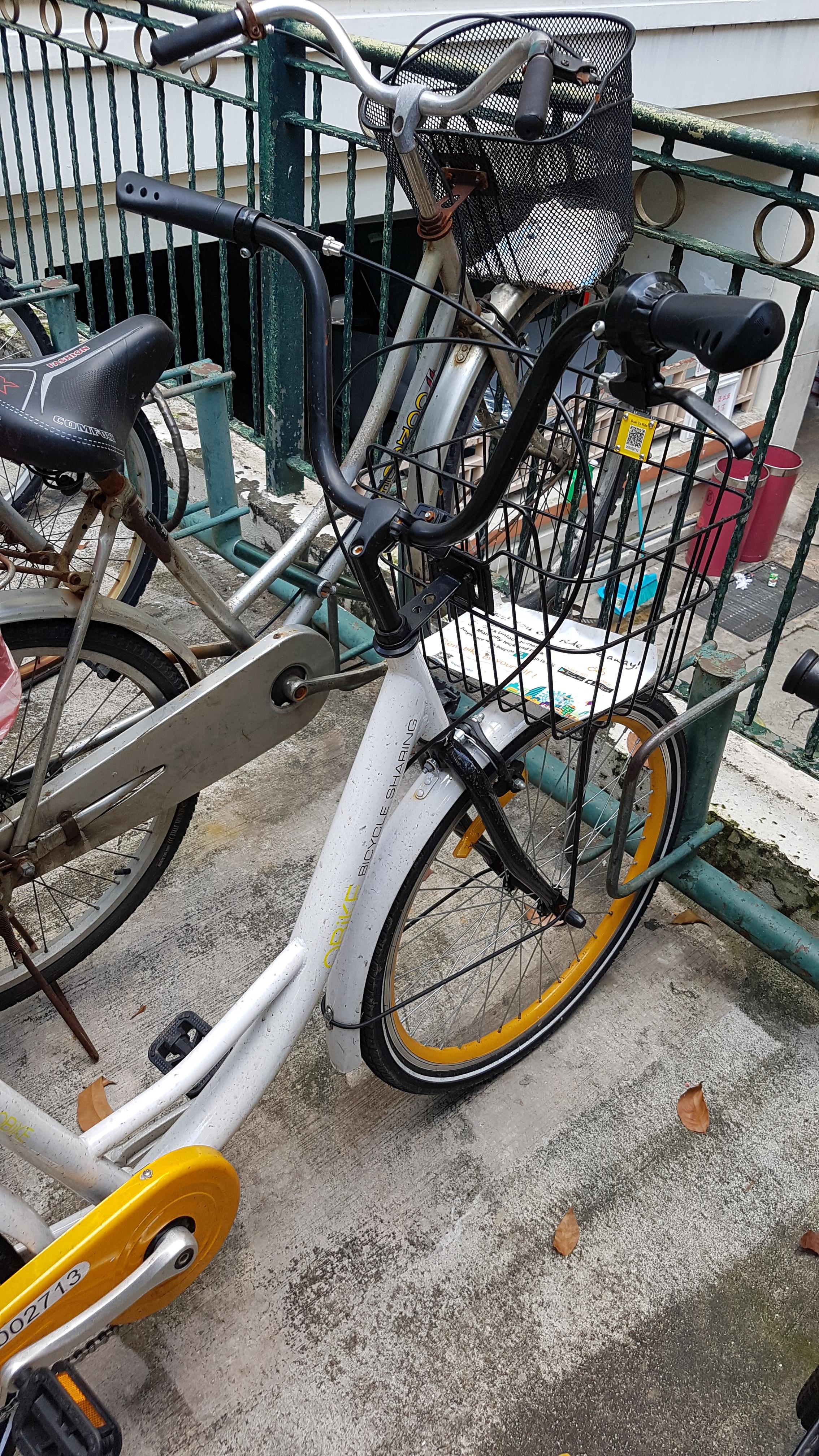 An app-based bicycle rental company has launched in Singapore. (Savour that sentence for a moment, a series of words that would have made little sense a decade ago.) It’s called obike and they’ve put white and yellow bicycles all over the island. You sign up to their app on your phone, then scan the QR code on a bike, which unlocks the contraption and lets you take it for a ride.

I assumed that obike was one of the Chinese entrants to Singapore, exporting their model from the PRC to the Little Red Dot, but I was getting confused with their two competitors, ofo and mobike. The reason for my assumption was the app itself, with gave the impression of being poorly translated from the Chinese; there’s reference to reporting problems through the ‘custom service’ in the ‘APP’ and the strange capitalisation, and the invisibility of any such ‘custom service’ option in the user interface led me to believe it was a hastily rerolled version of something that worked perfectly well in another country, in another language. But not so. You don’t have to not be from a English-speaking country in order to butcher the language, as myself and my compatriots can demonstrate on a daily basis.

Bicycle sharing hasn’t been blissfully adopted yet here. There’s lots of photos of people dumping obikes in dumpsters, or hedges, or up trees, or using their own padlocks to deny anyone else use of a bike. At first I thought that was a daft thing to do, because you have to register to get the obike in the first place, so it would be fairly obvious that you’d taken it. But since you’re only charged for time spent cycling, it’s actually quite an efficient, if mean-spirited, way to ensure you always have a bike.

There’s no particular place to collect or return these bikes from, which is an advantage over having to rely on them all being available at a certain place, but it means they also end up distributed higgeldy-piggeldy all over the place, sometimes cluttering up paths, sometimes up trees, or wherever. Yesterday I saw one while I was taking La Serpiente to school, and today, rather than walk from her school to the station, I figured I’d ride.

I regretted this. The bikes are designed for people who don’t ride bicycles, so the seat is too low and enormous, instead of the slim sort of saddle that supports your ischial bones the way it should. Can everyone in this tropical paradise be a stranger to chafing? The seatpost also is too short for an efficient pedal stroke, but never mind. Better that we get people cycling than have them intimidated by not being able to touch the ground.

There is a basket on the front, which was a good place to put my phone and La Serpiente’s toy unicorn while I was on my way to the station. Sadly, first I had to remove all the soiled tissues somebody had stuck in the basket, because (I assume) people are bad people and need to prove they don’t deserve nice things. Or at least, that would explain why a bicycle parked right by a waste bin gets treated like a waste bin.

I’m not sure if this is because the chain is one long bright orange mess of rust, or the tyres are deflated oversize lumps of rubber, or there’s no grease in the hubs, but the obikes have incredible rolling resistance. As in you’d have to pedal downhill to keep up with somebody coasting on a regular bike. Were they always this bad, or did they reach this nadir by being left out in the rain every single day of their painful lives?

Oh, and the kickstand was seized up and wouldn’t retract, which means if I could have got it up to speed and tried some moto-style leaned over turns, I would have swiftly come a cropper. Maybe every obike rider is expected to bring a can of WD40 with them.

Finally, there’s no helmet to wear (it advises you to bring your own, a great impediment to spur-of-the-moment cycling) which my wife scolded me for. With the difficulty in pedalling, accompanied by my desire to not ride the wrong way down any one-way streets (marking me out as not a true Singaporean cyclist?) it took me at least as long to get to the station as I normally take to walk. But a 10 minute ride on the obike is free, and that’s the sort of value for money you can’t compete with. Plus afterwards the app tells you how many calories you burnt, as if that were the point of it. Maybe it’s really a stationary bike that goes places. It couldn’t get much slower.

I parked it by the station in a bike rack, and then emailed them to tell them this particular death trap needed some maintenance. I took a photo and everything, and in return, they replied to me to tell me to report problems through the app. Well, no points for custom service there then.

I’ll give them another chance, I expect. But clearly this isn’t an unalloyed pleasure yet, and it’s unclear you can maintain a safe fleet of bicycles in as hot and humid a place as here. We shall see…