Things I learned this week

This pelican is something every parent should have. 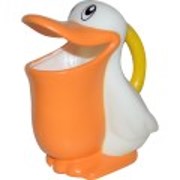 My wife ordered this large bird-shaped jug from an American website a few weeks ago, and I thought she had lost her mind in buying effigies of cute animals. But it turns out to be really great. In the past, we’ve used an old plastic jam jar to rinse the shampoo out of La Serpiente’s hair, but that takes ages. The pelican has about double the capacity of water, and the larger volume manages to sluice the water out much more effectively – a few sloshes and she’s clean, whereas before it’s taken ages. It does, of course, have the problem that she keeps trying to kiss the pelican, but what price a more efficient bathtime? Alas Munchkin, the manufacturer, have not seen fit to produce any other bird-shaped rinsing devices. Yet.

I’m a reliable bad-luck totem for Chelsea supporters. At least when I’m drunk. Last night I went out at 9:30 to the Irish pub round the corner from our apartment.

Well, I say the Irish pub. What I mean is the soulless, well-lit space at the ground floor of a hotel that was built in 2014, festooned with Guinness Is Good For You posters and Irish-themed tat. As it’s getting close to Halloween (pace Tokyo) some of the Irish themes are hard to make out. In particular, there’s a big poster that, on careful inspection, reads “The Luck Of The IRISH” but, from your peripheral vision, and with spray-on cobwebs covering it, appears to blurt out “Fuck The IRISH”. Is it actually an Orangeman themed pub, themed to satisfy vehement Unionists? And if so, there can hardly be a big market for that in Singapore, surely?

And that’s before the ill-advised drinks on the menu. If you’re Irish, I’m not sure an Irish Car Bomb has as jovial a connotation as if you were somebody who lived in a country where they weren’t blowing up cars in the 70s and 80s. And the Black and Tan – why name a drink after a vicious group of counter insurgents? You have to assume it’s ignorance rather than wilful attempts to cause offence. Well, as long as the dessert section doesn’t have a “Bloody Sundae” on offer.

Perturbed by this, I drank Guinness like it was going out of style, perhaps to make up for not being Irish and having some residual British guilt for the previous few centuries. (In the same way, I suppose, that Englishmen try to compensate for their part in the Troubles by going to Temple Bar on a stag party and vomiting everywhere). The Chelsea-West Ham match came on, and just as with the time I went to see Crystal Palace play Chelsea, millions of pounds of highly paid footballers were thrashed by what looked like a bunch of painters and decorators and people on day release from the local prison. I almost felt sorry for Chelsea this time round. They had two goals disallowed (one where the striker was just very slightly offside, but another where the ball was 7/8ths over the goal line but this apparently still wasn’t enough) and now languish mid-table, while Chelsea and Stoke and Grimsby or some other ridiculous combination are all at the top of the Premiership. I almost felt sorry, but then I don’t really give two hoots about football so this is just quite amusing. And I have a consistent ability to make Chelsea play badly, as long as I’m drunk. What next? Do I watch a football match sober?

Township sucks the life out of my phone battery, and my soul. I suppose I began to learn that last week, but as I’ve become more and more obsessed with collecting eggs, wheat and sugarcubes this week its negative impact on me has grown stronger. I’m also annoyed that it is based on a generic farm somewhere in America, when if you say “township” to me I immediately think of Soweto.

Trampolines. Today we went to a trampoline park in Singapore. There are two of these – warehouse spaces filled with trampolines and children jumping up and down on them. Before you start jumping you are given a set of stern safety warnings about not running, not jumping two at a time on a trampoline, not doing anything daft – basically everything you’d want to do at a trampoline park. La Serpiente jumped up and down for about fifteen minutes and seemed to enjoy it, but really wore herself out. (And possibly hurt her knee, but we’ll see what she’s like tomorrow.) Despite that, she didn’t have a nap this afternoon, which in turn meant the rest of us were a complete wreck all day. Thanks for nothing, trampolines!

Tokyo is not always bad. After my previous stay in Roppongi where by the end of it (well, by the middle) I basically detested life, the universe and Tokyo, I had an enjoyable time at the start of this week. Partly I think that’s because I managed to go for a run, and partly because I ate lots of pizza.

When I drink, I really don’t write very good blog entries. Enough said (validated with a quick check of the archives here and here). My sacrifice was West Ham’s gain, etc.

What Did I Learn
drunk, football, games, ireland, pizza, tokyo

2 responses to “Things I learned this week”