The Laziness Of The Long Distance Runner 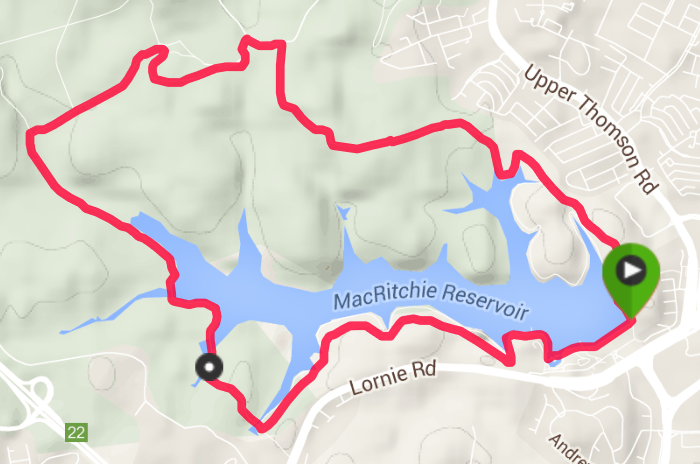 Today I went back to MacRitchie Reservoir for an early morning run. It’s been a while since I ran there: there’s a bug on the Garmin website right now which means I can’t search it, but Strava thinks I haven’t run around MacRitchie since October of 2014. Which I suppose could be possible, as in 2015 I was doing a lot more around the Green Corridor and Mount Faber (apart from one ridiculous run where we went all the way to MacRitchie from Tanjong Pagar, a 24 kilometre epic…).

I didn’t go very fast today. I can blame that on not getting much sleep again (in bed at midnight meant I had less than six hours sleep, once you take out having to persuade La Serpiente back to bed at half past midnight, and again at just short of six a.m). I can blame it on not recovering properly from yesterday’s Parkrun. (Which is another way of saying I hadn’t got enough sleep.) Or I can bring up the almost complete lack of training volume that I’ve had over the past year, and point to that as a reason why I can’t keep my speed up.

Strava makes me feel particularly lousy, as it provides a handy graph to show me how much worse this effort was than ‘normal’:
.

Frustratingly, downhill I can certainly go quickly. I was running with two other guys who clearly aren’t wrong in the head like me, and paced themselves on the downhills, using them to recover from the uphill sections on the first half of the trail. Whereas I go hell-for-leather, exploring far greater extremes of bravery than I ever managed wearing a full set of body armour on a downhill mountain bike, leaping from rock to rock and over treacherous roots that are ready to flip me forwards onto my face. There was one point where I’d made at least half a minute over the others, just by proceeding at headbangingly stupid speed when gravity was my friend.

By the time we got to the last section, running back towards the start line, I was flagging badly, and it was all I could do to jog the last section and not just crumple in a heap half a kilometre from the end. The others were still fresh enough to be contemplating a second round of the reservoir, or another 10k somewhere else this evening, whereas I had to stumble to a waiting taxi and return home.

Clearly, I have unfinished business at MacRitchie.

But it’s not all bad. Not bad at all. OK, I have sore feet – MacRitchie always gives me sore feet, but then I am stupid enough to run on rocky paths as fast as I possibly can, so that’s something that is more my fault than the Reservoir’s. But part of the rush to get home today after not rushing particularly fast around MacRitchie was that we had brunch scheduled for 10am at Super Loco, a Mexican restaurant in Robinson Quay. Thank the lord (and other people’s kids’ nap schedules) for this getting delayed to 10:30, which gave us just enough time for me to get hosed down and changed, and for us to take a train up to Clarke Quay and then walk round to the restaurant.

Super Loco is a companion restaurant to Lucha Loco, the Mexican restaurant I can almost see from the window of our flat, but rather than catering to drunken hipsters every evening, Super Loco is also open in the mornings. At Lucha Loco they serve the only sweetcorn I ever eat, coated in spicy mayo and all kinds of probably terrible things. At Super Loco this goes to a new level – the kernels of corn are shucked off the stem and put into a small cup, and then covered with more spicy mayo. And when I say spicy I don’t mean “it’s quite hot”. I mean that it starts off tasting like corn, and then there’s a slight tingle on your lips, and about twenty seconds later you achieve liftoff and start breathing fire over the table. Which is good if you’re feeling sleepy after your run and need a pick-me-up.

I had a coffee as well, a proper, caffeine-laden flat white, and it didn’t taste disgusting, and it didn’t have upsetting consequences on my digestion either, so all good there. Finishing up, I had avocado toast that for the first time ever didn’t feel like an enormous rip off (there was enough toast, and enough avocado, and a smoky, spicy chipotle dressing that made it taste like something I couldn’t make myself in five minutes, which is one of the major reasons for a restaurant to justify its existence). OK, paying twelve dollars for this might be a bit ridiculous, but it felt like better value for money than yesterday’s brunch.

After a long and fulfilling conversation (and some time playing with La Serpiente, my friend’s son and a ball) we walked back, a long and arduous journey where I got sunburn, but that encouraged La Serpiente to take a two hour nap, and for me to get some stuff done and then also doze off for a while. I woke just in time to take her downstairs to miss the bus to music class, and have to book an Uber instead as all the taxis had dissolved in the rain. Things are looking up – yesterday I left my wallet in a taxi and was only able to retrieve it by running down the road in my flip flops after him, and last week was the disheartening saga of the mislaid telephone, but today I didn’t manage to leave anything inside a transportation device (although we managed to lose my doorkeys for a couple of hours).

Tomorrow I start my proper training plan. Or rather, I get up at six and do a tempo run: two 15 minute sections at 4:39 pace, and damn the consequences. If I can’t get a good time out of MacRitchie in February, I’m going to be sore, and not just in my feet.